One name is to be found on many of China’s best-known beverage brands, such as Qingdao beer or the popular herbal tea Wanglaoji: Guangxi Beihai Jinmeng Zhiguan AG (short form: Beihai Jinmeng). Recently founded, the company has quickly penetrated the Chinese market. This success is due in no small part to a cupping press for the production of beverage cans supplied by Schuler.

Last year, Beihai Jinmeng launched production of beverage cans at its new facility in which it had invested around € 80 million. At the heart of the production line is Schuler’s DA 140 cupping press. “The Schuler press displays a high degree of stability in continuous operation, with relatively low operating costs and maintenance investments,” explains Project Manager Tan Jintu of Beihai Jinmeng’s Production Technology division. 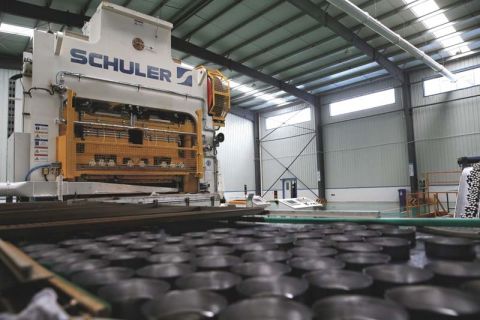 “Because of the comparatively higher wear, similar machines with sliding jib systems require regular adjustment and maintenance – or even the replacement of the sliding jibs – to ensure stable operation,” adds Tan Jintu. By contrast, Schuler’s cupping presses are completely wear-free and do not require maintenance of any kind.

Due to the immense dynamic loads involved, cupping presses operating at high speeds and with heavy weights always run the risk of unevenly distributing the press force across the two sides – with negative consequences for the quality of the dies and products. Schuler’s DA 140 cupping press is therefore equipped with a dynamic counterbalance system which balances out the machine vibrations caused by high press forces during operation.

The machine needs neither a solid concrete foundation nor for its base to be screwed to the floor – only the line’s own weight has to be taken into consideration. The play-free pretensioned slide guidance guarantees precise slide motions with only minimal tilting, thus significantly prolonging die service life. Moreover, the maintenance-free direct drive and very fast clutch/brake combination ensure the cupping press operates with a high degree of efficiency.

“Apart from regular minor servicing, our production line can operate continuously around the clock,” says Tan Jintu. “So far, our cupping press from Schuler has shown no defects or malfunctions of any kind. This has led to considerable savings in staff and maintenance costs.”

Beihai Jinmeng is currently producing beverage cans for Wanglaoji, China’s oldest herbal tea manufacturer. “With regard to Wanglaoji’s quality standards and its positioning in the beverage market, we can safely say that their requirements with regard to beverage cans are among the highest in China,” says Tan Jintu. “The cupping press supplied by Schuler meets all our manufacturing needs with a consistently high level of quality.”

Up to 300 strokes per minute

Most of the beverage cans produced by Beihai Jinmeng have a dimension of 330, 355 or 500 milliliters. With a press force of 140 metric tons and up to 300 strokes per minute, the DA 140 guarantees the flexible and economic production of high-quality beverage cans. At the same time, it is also suitable for particularly thin cans and complex production processes.

The hook-in die change brackets, hydraulic roller bars, and motorized slide adjustment all ensure fast die change times. “If there are fluctuations in the thickness of the aluminum used, for example, this can lead to problems with the pressed can bodies,” explains Tan Jintu. “The Schuler press enables us to react to this within just a few minutes – we simply have to adapt the parameters by changing the inner and outer slide height.”

With regard to the cooperation with Schuler, Tan Jintu says: “Schuler’s engineers are top-class experts. They found the right solution for all of our wishes, such as linking the individual processes, supplying software to control the production line, providing basic technical support or designing the system’s wiring.” Schuler’s turnkey delivery of the production line included a coil line, feed device, coil lubrication unit and dies, so that production could be launched immediately on site.

Schuler’s experts not only travelled from Germany to install and set up the line, however, but also to train Beihai Jinmeng’s employees with regard to production, operation and maintenance. A joint venture company German Machine Tool Service Co., Ltd (GMS), is responsible for providing the complete technical customer service, including spare parts and advice on accessories and technical solutions. “The service provided is extremely professional and well structured,” concludes Tan Jintu: “We are highly satisfied.”

About the Schuler Group – www.schulergroup.com

As the technological and global market leader in metal and plastic forming equipment, Schuler offers cutting edge presses, automation, dies, process know-how and services for the entire metal forming industry and lightweight vehicle construction. Its clients include car manufacturers and their suppliers, as well as companies in the forging, household equipment, packaging, energy and electrical industries. Schuler is the market leader in coin minting technology and supplies systems solutions for the aerospace, railway and large pipes industries. The company can trace its roots back to a locksmith shop founded by Louis Schuler in 1839 and celebrates its 175th anniversary in 2014. In fiscal year 2012/13 (ending Sep. 30), Schuler posted sales of € 1,185.9 million. With 5,600 employees, Schuler is represented in 40 nations around the world. The Austrian ANDRITZ Group holds a majority share in Schuler.

The steel industry encompasses a large number of very different processes, from the smelting of the raw materials to the...

Clariant, a world leader in specialty chemicals, has announced a significant investment to expand its plant in Casablanca, Morocco and...

EVENT - CWIEME returns to Berlin for the 18th year running

CWIEME Berlin, the world’s largest and most comprehensive event in the coil winding, insulation and electrical manufacturing industry, returns this...

While the UK's Office of National Statistics reported a surprise 4% dip in construction output and flat growth in manufacturing...

ArcelorMittal recently approved a EUR18m investment to upgrade the continuous casting line at its Industeel Belgium site in Charleroi. The new...

The VIKING™-2 Helmets offer the best optical clarity in the welding industry today Lincoln Electric has developed a new generation of...

CONTI-AIR® Black Sticky presented for the first time at METPACK in Essen • New development for high-quality sheet iron and...

It’s a fact that relatively few machine tools are acquired direct from the manufacturer as a complete, turnkey package. Indeed,...

WELDING - Passionate about pressure for 30 years

Makers of seamless pipe, tube, profiles and bars now have access to ZUMBACH gauges, which have just been enhanced, now...

Powell Electrical Systems Inc., Delta/Unibus Division has reduced the process time taken to selectively plate each side of its copper...

This non-contact measuring solution opens tremendous potential to tube and rod manufacturers for in-line quality assurance - and is achieved...

The appetite for metals and minerals is growing. As demand increases with the growth in global population and the emergence...

Fine Tubes, a world-leading manufacturer and distributor of precision tubes for critical applications, is delighted to announce that it has...

ArcelorMittal plate mills in Burns Harbor, Coatesville and Conshohocken are supplying 160,000 tonnes of high performance steel that will be...

In the field of plastic injection molds, producers are very careful when it is time to decide which basic material...

ABB's new safety PLC has provided the platform for Sandvik Materials Technology to add zoned safety guarding to a large...

Clariant, a world leader in specialty chemicals, held a ribbon-cutting ceremony on April 10, 2014 to mark the opening of...

Smartline SA-S combines excellent precision and highest stroke rates An Asian manufacturer has placed an order with Schuler for a press...

Work on the final phase of Keighley Laboratories’ ambitious new heat treatment facility is nearing completion, with its state-of-the art...

PKD Precision Sheet Metal Ltd, a leading subcontractor based in Stoke-on-Trent, has installed a new TRUMPF TruPunch 3000 S11 with...

Atlas Copco has won a contract to deliver a number of large range Pit Viper rotary blasthole drills to Chilean...

Weld Purge Monitors® are an essential tool for the Process Industry, with various models serving different levels of weld purge...